Monica Osagie, the student at the centre of a sex-for-mark scandal rocking the Obafemi Awolowo University (OAU), Ile-Ife, would be facing the institution’s Investigative panel tomorrow.

According to this letter obtained by LIB from the Office of the Secretary, Post-Graduate College of the institution dated 19th April, 2018, with Ref. No: ADP 15/16/H/1424, Miss Osagie, a Postgraduate student on the Master of Business Administration Regular programme was invited to the meeting slated for 10.00am.

The invitation came on the heels of her lawyer and Executive Director of Women Advocates Research and Documentation Centre (WARDC), Dr. Abiola Akiyode-Afolabi who claimed that the victim had not been invited by any panel.

The letter entitled: “Re: Investigative panel on alleged harassment of a female student: Detailed audio recording: Request for the presentation of Miss Osagie Monica Oselode”, was signed by the OAU Deputy Registrar and Post-Graduate College Secretary, Mrs. A.O. Fadeyibi.

The letter reads in parts: “I write at the instance of the Provost, Post-Graduate College to invite you to appear before the investigative panel on alleged harassment of a female student detailed in audio recording at its meeting which will come up at 10:00 am on Tuesday, April 24, 2018. Please be informed that on arrival, you are required to call the Secretary to the panel to facilitate your appearance before the panel.” 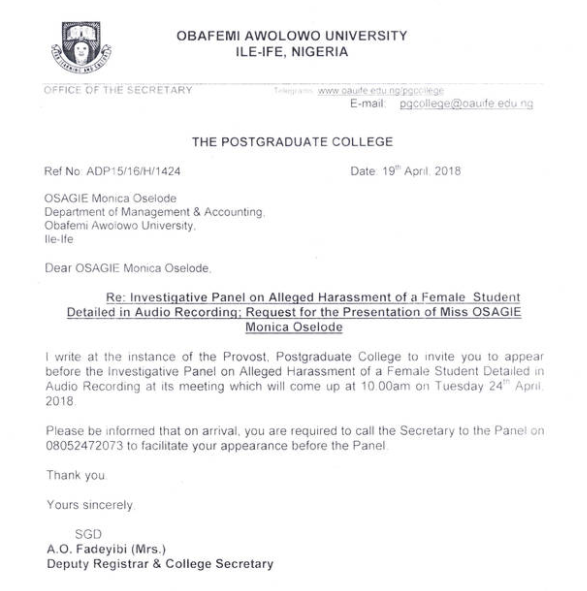 Akiyode-Afolabi had raised the alarm that Osagie, resorted to ‘self-help’ through the audio recording after two lecturers she approached for intervention disappointed her.